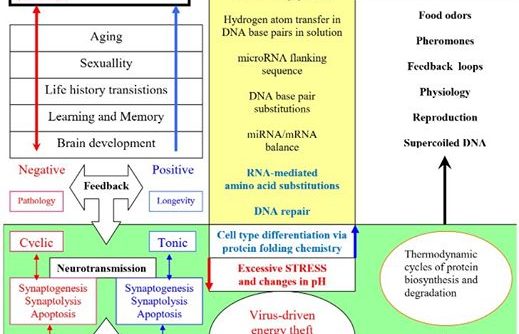 The “roots to shoots” model  of CDC’s, FDA’s, and NIH’s ignorance places the pseudoscientific nonsense into the context of coherently organized biology. Everything known about the physics of quantum coherence protects organized genomes from the virus-driven degradation of messenger RNA that links mutations to all pathology via quantum biology.

The way that the pseudoscientific nonsense was presented led to this, as if it was a calculated decision to destroy the world’s economies:

WHO declares the coronavirus outbreak a pandemic 3/11/20

Tedros said this was the first coronavirus to reach pandemic levels, but also said “we have never before seen a pandemic that can be controlled.”

I do not believe in conspiracy theories, but do believe you can “follow the money” to link profits to political motives.

The WHO has stressed that using the word “pandemic” does not signal a change in its advice. It is still urging countries to “detect, test, treat, isolate, trace and mobilise their people”.

By declaring the coronavirus outbreak a pandemic, WHO caused a panic. Then, fake-news touting Trump-haters tried to link the panic to President Donald J. Trump’s lack of preparedness.

But see: Is the world due for an influenza pandemic? (June 2019)

Because there is no discernible pattern for the emergence of pandemic influenza virus strains, the old saying applies: It is difficult to make predictions, especially about the future.

The discernible pattern was predicted by what is known about coherently organized biology and: Emergence of Human G2P[4] Rotaviruses in the Post-vaccination Era in South Korea: Footprints of Multiple Interspecies Re-assortment Events

The interspecies re-assortment events were exemplified in: Viruses Can Scatter Their Genes Among Cells and Reassemble 5/21/19

The reassembly of viruses and viral fragments in vaccines established a basis for the pattern of re-assortment events across species and virtually every world leader failed to prepare for the pandemic, except for the President of the United States.

“We applaud the administration and Congress for recognizing that protecting our nation’s health requires deploying BARDA’s unique capabilities to combat all hazards — not only chemical, biological, radiological and nuclear threats, but naturally occurring health threats as well,” Jamie Bay Nishi, director of the Global Health Technologies Coalition (GHTC), said in a statement.

The first assessment of these programs, the report illustrates the progress that can be made for children’s health by addressing school nutrition, especially since children commonly consume up to half their daily calories during the school day. The Academy will continue to advocate for policies that expand access to healthy foods for children and families.

Attempts made by President Donald J. Trump to protect human populations in the USA from the next pandemic have consistently been denigrated by those who appear to know virtually nothing about how energy-dependent RNA-mediated viral latency is biophysically constrained across kingdoms.

For example of what is known, see: Nutrient-dependent Pheromone-Controlled Ecological Adaptations: From Angstroms to Ecosystems 4/18/18

…olfactory/pheromonal input links food odors and social odors from the epigenetic landscape to the physical landscape of supercoiled DNA in the organized genomes of species from microbes to man during their development.

To our knowledge, our study is the first report to identify vitamin C-dependent differential novel miRNA expression in hBMSCs.

To my knowledge, they have stolen my claims from my invited review of nutritional epigenetics, which I submitted to the journal “Nutrients” in 2014. It was returned without review before I published it as Nutrient-dependent Pheromone-Controlled Ecological Adaptations: From Angstroms to Ecosystems 4/18/18.

The likelihood that hemoglobin variants are associated with other beneficial nutrient-dependent changes in microbiota populations in the gut can be considered in the context of how balanced nutrition, which includes access to endogenous vitamin C in human populations, supports efficient metabolism and ecological niche construction [17].

Researchers recently rediscovered a nutrient-dependent epigenetic variant that links vitamin C to what is probably a glucose and glucose dehydrogenase-dependent base pair change. The base pair change results in addition of a methyl group to a cytosine base, which takes on a hydroxyl group to form different 5-hydroxymethylcytosines (5hmCs). Different 5hmCs are associated with differences in cell types that have the same genetic backgrounds. Nutrient-dependent epigenetically-marked bases help to explain how hundreds of cell types in the human body and in the brain [24] are differentiated and how they maintain their glucose-dependent and other nutrient-dependent receptor-mediated identities [25].

The molecules—which were found within specific regions of the mouse brain—have a similar structure to carnitine, a molecule used to help burn fatty acids for energy.

The history of my life’s works was based on

2) his claims about the ATP-dependent link to RNA interference in 1964.

See: Effects of Carnitine on Fatty-Acid Oxidation by Muscle (1959)

…it is relevant to ask by what means serum fatty acids are transported from blood vessels through the interstitial space to the active sites for fatty-acid oxidation in muscle cells.

Dependence of RNA synthesis in isolated thymus nuclei on glycolysis, oxidative carbohydrate catabolism and a type of “oxidative phosphorylation”

“We expect markets to remain volatile until we see some combination of: 1) evidence of successful virus containment; 2) clarity on the net economic impact; and 3) a concerted global policy response,” writes Mark Haefele, chief investment officer for global wealth management at UBS.

Successful virus containment will require a link from what President Donald. J. Trump’s scientific advisor K.B. Whaley has published on how to link quantum coherence to coherently organized biology by starting with God’s Creation of anti-entopic virucidal light and linking it from the physiology of pheromone-controlled reproduction in species from microbes to humans via what organisms eat and sympatric speciation as detailed in Biblical Genesis before and after the Flood.

After the Flood, oxidative phosphorylation enabled the rapid re-population of every organism of every species in every ecosystem via biophysically constrained amino acid substitutions such as EDAR V370A in the mouse to human model.

See: Environmental selection during the last ice age on the mother-to-infant transmission of vitamin D and fatty acids through breast milk

The frequency of the human-specific EDAR V370A allele appears to be uniquely elevated in North and East Asian and New World populations due to a bout of positive selection….

For example, calcitriol is the active form of vitamin D. Its effects on the microRNA(miRNA)/messenger RNA (mRNA) balance appear to protect against perturbed protein folding, which is associated with colorectal cancer. MiRNA-627 targets the mRNA that encodes an enzyme linked to histone demethylation and amino acid substitutions that increase stability of hydrogen bonds in DNA, which are important to protein folding [26]. Rarely does a week go by without yet another report that details cause and effect in the context of miRNAs [27]. For example, the potential for therapeutic use of miRNA-126-5p to treat atherosclerosis was reported in time for me to note the importance of miRNAs to cell type differentiation via the circulatory system [28].

If you add what is now known about zinc supplements to what is known about how vitamin C and vitamin D3 biophysically constrain microRNA-mediated viral latency, you get the patent for naturally occurring light-activated carbon fixation and RNA interference, a “billion dollar baby” in therapy that only the very rich can afford.

See: Zinc and immune function: the biological basis of altered resistance to infection (1998)

The effects of zinc on these key immunologic mediators is rooted in the myriad roles for zinc in basic cellular functions such as DNA replication, RNA transcription, cell division, and cell activation.

See also: The Role of Zinc in Antiviral Immunity (2019)

… zinc treatment applied at a therapeutic dose and in the right form has the potential to drastically improve the clearance of both chronic and acute viral infections, as well as their accompanying pathologies and symptoms. Consequently, the role of zinc as an antiviral can be separated into 2 categories: 1) zinc supplementation implemented to improve the antiviral response and systemic immunity in patients with zinc deficiency, and 2) zinc treatment performed to specifically inhibit viral replication or infection-related symptoms (75, 78–82, 83, 85–91, 95–101, 103, 104).

Now that the panic linked to preventable coronavirus pathology has virtually eliminated all thoughts about vitamin supplements, or eliminated the supplies of the supplements, prepared to get well via “A Billion Dollar Baby in Therapy”

RNAi has targeted exogenous genes in models of viral infection…

and the research topic: MicroRNA Signaling

View all 18 Articles, but see for example: MicroRNA Involvement in Signaling Pathways During Viral Infection 3/10/20

Follow the money to determine whether or not the “roots to shoots” model of biophysically constrained viral latency could have prevented the coronavirus crisis and billions of dollars spent on profiteering after the panic.